It is not easy to be a Pole and a Catholic at the same time in Belarus. Each sister who worked there has her own experience in that matter. Long lasting persecution of the Catholic Church had an effect not only on its material state (ruined buildings, some changed into granaries, magazines, stores, shops, cinemas, cultural centers, etc.), but on people’s mentality as well. The present openness of the authorities to freedom of beliefs (mainly directed to the Orthodox Church as an official state’s religion), gradually changes the attitude of ordinary people to catholics too. The Catholic Church has been on the safe side: according to the Gospel, first of all serves the poor whatever the religion or denomination. This has been our, Pallottines, new/old apostolic field. New – because until collapse of the communism, there was no option of any apostolic work in Belarus. Old – because before the II WW the borders of Poland ran further to the East, and Rajca, the place of our Pallottine origins, belonged to Poland at that time, and after the war become a belarusian possesion.

The Pallottine Sisters, invited by Fr. Waclaw Sutkowski, SAC, arrived in Belarus, WORONOWO, on September 15th, 1993. Going to Belarus meant returning to our roots in Rajca. This was a deep desire of many elderly sisters. For the first few years sisters lived in different places in rented flats or by Pallottine Fathers at the parish. Finally the house was bought in December 2001, which was a sign of settlement of the sisters in the area. Sisters cathecise children in the parish and outside the town, run a charitable service, prepare meals for the poor, care for the sacristy and run “Cenacles” – formation-apostolic groups for children and youth based on Pallottine spirituality (as a preparation to the UAC in the long run). At the moment, there are three sisters in the community. Worth mentioning is a good cooperation with German group led by Sr. Ingrid Schuler, SAC whoes support and help will be never forgotten. 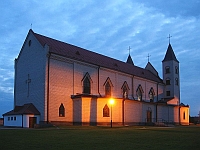 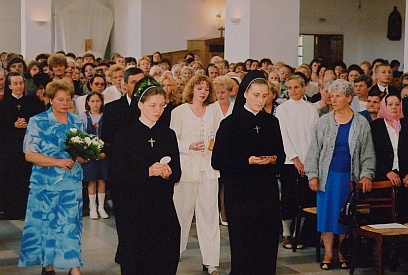 The Final Profession of Belarusian Pallotine Sisters in Woronowo.

In BEREZA KARTUSKA – since 1995. We were invited by Pallottine Fathers (Fr. Andrzej Marzec, SAC) who had worked there since 1991. The beginnings were very difficult. Artificially created obstacles by the local authorities made extremely difficult the pastoral work. When Pallottines arrived there was no Catholic church in town (the last one was destroyed in 1964). People preserved their faith gathering in secret for prayers at their homes. For that they were in danger of being imprisoned. When Fr. A. Marzec came to Bereza he was allowed to hire, only for two hours, a theatre hall to say a Sunday Mass, paying for it quite a bit of money (though for the people it was considered as a great achievement and blessing). After a long and painful struggle Father – together with the people – received the permission to built a new church. It is completed now. Currently two Pallottine sisters are in the community there. They are fully involved in the parish works. 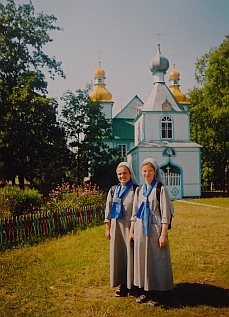 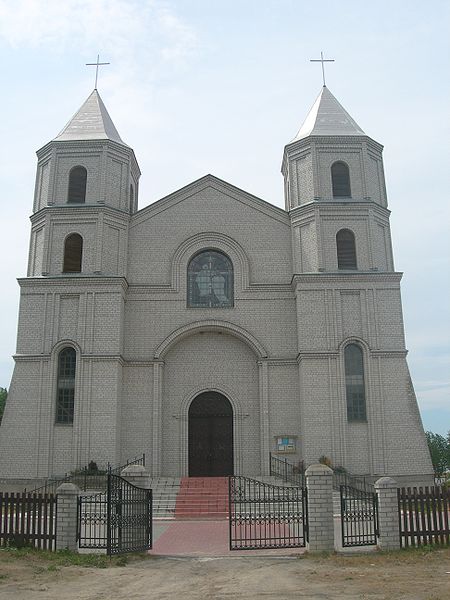 The parish church in Bereza built by the local people themselves (huge involvement of women). 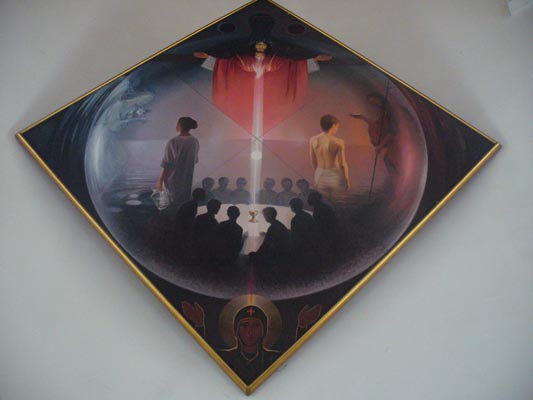 The picture above the main altar in the church painted by a local artist Vasil.

Information based on sources from provincial archives.

Photos by Sr. Blanka Sławińska and from Wikipedia.