We claim as our Founder, St. Vincent Pallotti, a 19th century Roman priest, on fire with love for the infinite God, a man who inspired each person on his path in life, to join him in the apostolic mission of the Church: on a micro-scale in his own immediate environment, and on a macro-scale – going out to the whole world, if such be God’s will. For Pallotti each person possesses a wealth of gifts from God: personal talents, special blessings from God, including a disease or handicap, offered for apostolic purposes. 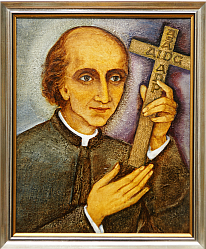 We trace our beginnings from this same evangelical fervor. Our roots reach back to the Rome of 1838, when Pallotti, at the height of his own pastoral activity, began to develop a very intense cooperation with a group of apostolically-minded women, devoting themselves benevolently to works of charity. From them the first community of Roman Pallottine Sisters evolved.

Pallotti’s thirst to diffuse the faith also in missionary countries materialized only after his untimely death in 1850. After the establishment of the International Missionary College in Rome in 1891, some Pallottine novices branched out into the world. First they ventured to Cameroon, West Africa; afterwards to Limburg-on-the-Lahn, Germany. Here, in time, as the result of various historic complications, came into being the foundation of the missionary branch of Pallottine Sisters. At present the general government of Pallottines is seated in Rome. As early as 1909, the apostolic zeal of the sisters in Germany led them to England, and shortly after to the United States Of America, Belize, South Africa, Switzerland, Poland and Brazil. After the sisters in Poland had become well-established, they began missions in Rwanda and Congo, in Ukraine, Belarus and Russia; they reactivated our presence in Cameroon. Sisters from England formed the mission in Tanzania, East Africa. The Generalate in Rome accompanied the new mission in India from its beginning until it became a full and independent province in 2010. The Pallottine Missionary Sisters also minister in Italy and France, in Zambia and Uganda.

Our vision statement is to be found in Our Way of Life: We are the Congregation of the Missionary Sisters of the Catholic Apostolate (Pallottines), an international apostolic institute of pontifical right whose constitutional aim is: “… for the greater glory of God to revive, to deepen and spread faith, to strengthen hope and rekindle love among people. We want to awaken in all Christians an awareness of their apostolic call and to follow it, so that here will be one fold and one Shepherd.” (OWL, 10) “According to Pallotti’s mandate, the close following of Jesus Christ is the foundation of our religious institute, and the Gospel is our rule.” (OWL, 15) “Our religious institute is called to participate in a special way in the apostolic mission of the Church.” (OWL, 18) “The spirit of love, of humility and service, of simplicity and patience, of mercy and heartfelt joy needs to be a special mark of our Pallottine spirituality.” (OWL, 16)