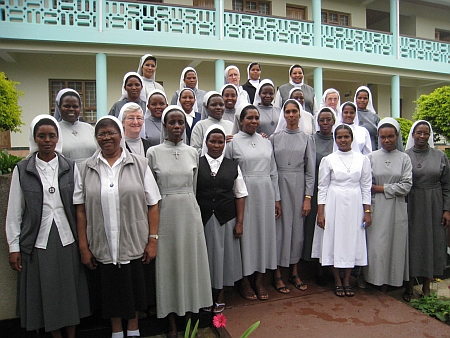 During this Jubilee Year of our Pallottine family we were honoured in Tanzania to host a Superiors Workshop for the leaders of our communities in Africa and India. It was organised by the General Administration under the theme ‘Through the Love of the Spirit, be Servants to Each Other’ (Gal 5:13). The focus was on Sieger Kooder’s expressive Icon of Jesus washing the feet of Peter. (John 14. 1-7). 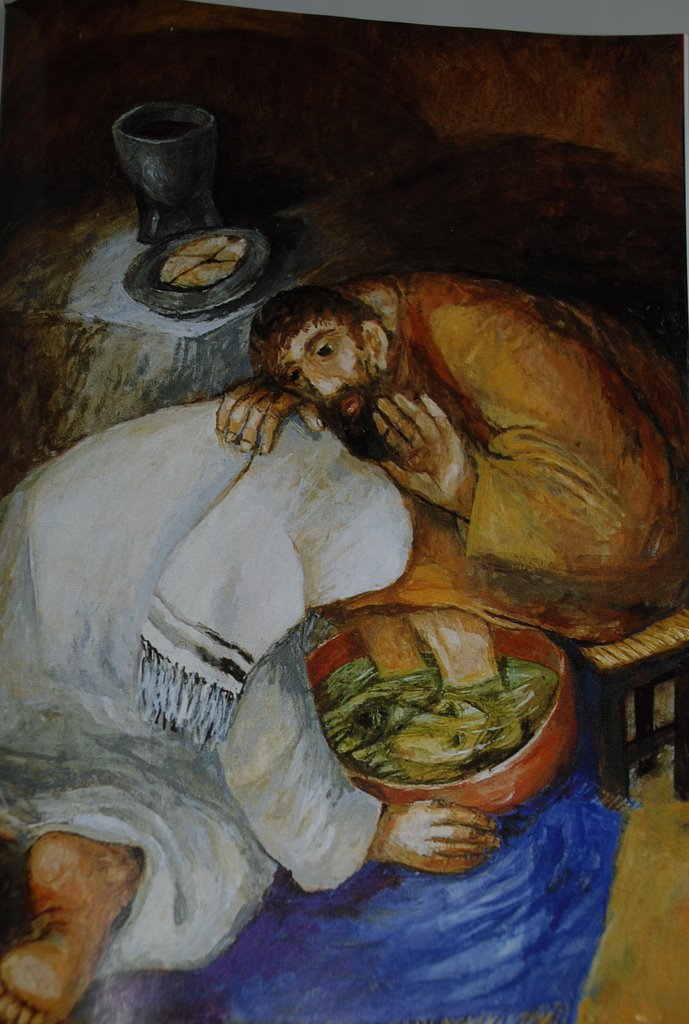 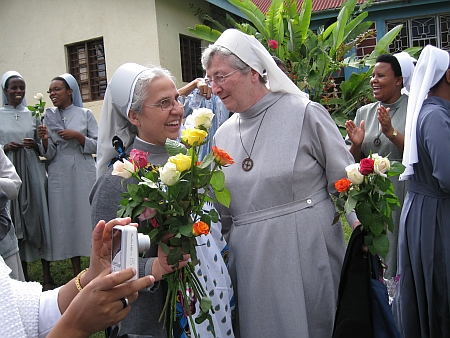 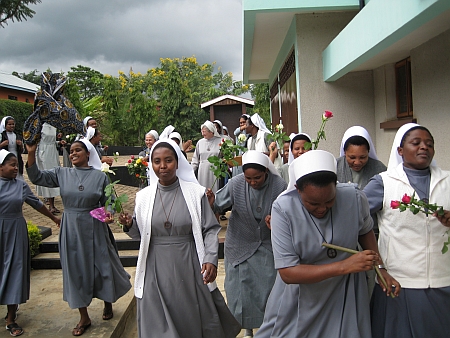 Since April 20th participants began gathering at the Noviciate House in Poli Singisi outside Arusha – two Sisters came from South Africa, four from India, six from Rwanda under the leadership of Sr. Bellancila Mukandahiro, the Regional Superior, and 12 from Tanzania led by Sr. Mary Mc Nulty, Provincial Superior of the English Province. General Councillors, Sr. Josephina D’Souza and Sr. Stella Holisz directed the Workshop. Sr. Izabela Swierad, our Superior General from Rome accompanied the sisters in the last three days. Sister will stay in Tanzania until 14 May for canonical visitation. 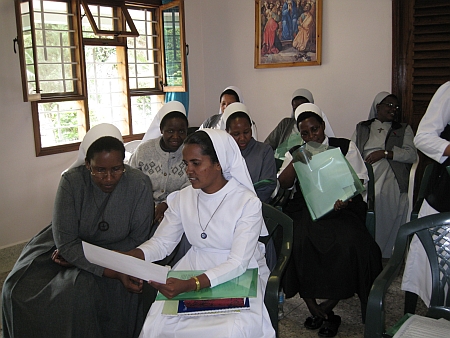 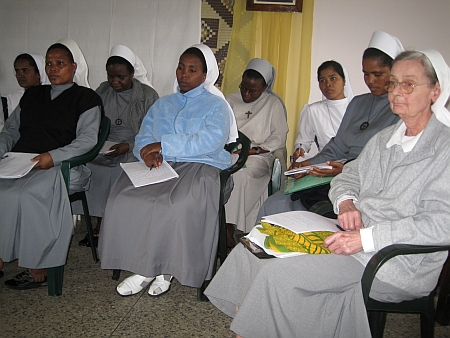 In preparation for the Workshop all participants were asked to study the Instruction of the Congregation for Institutes of Consecrated Life and Societies of Apostolic Life, The Service of Authority and Obedience and to prepare answers to questions based on the document and on Pallottine spirituality. On Monday April 23rd, Fr. James Amasi SAC, the Delegature Superior of Tanzania/Kenya, celebrated Holy Mass for the opening of the Workshop. 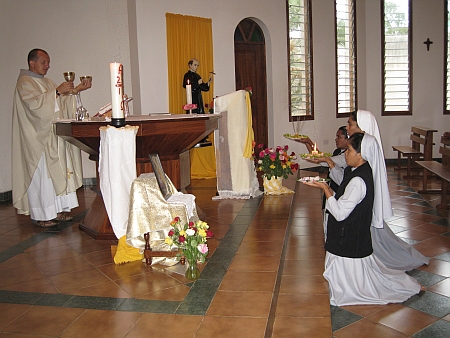 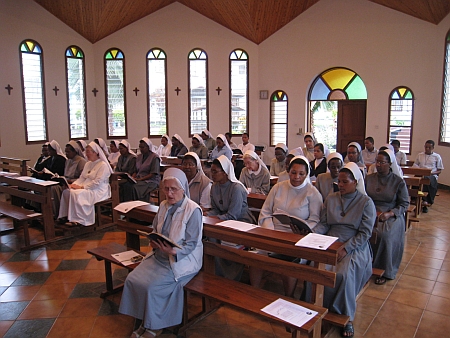 The closing took place on May 2nd. Its aim was to empower the young leaders with the right motivation and attitudes of religious Pallottine leadership, that they become good Leaders imbued with the Spirit of St Vincent Pallotti, our Founder.

The Workshop was well organised and the topics were very challenging. Sr. Stella gave an inspiring talk on Love and the Cenacle Experience leading to Service. Fr. Romualdo Uzabumwana SAC, the Regional Superior of Rwanda/Congo, who was present with us for two days talked on The Service of Authority in the Religious Community – Guiding others on the Way of God. On Wednesday we had a guest speaker from Dar es Salaam, Sr. Flora Mashughuli, Carmelite Sister of St. Teresa of the Child Jesus. From her own experience she shared about the Challenges and Struggles of Major and Local Superiors in the International Congregations in the Mission Countries. 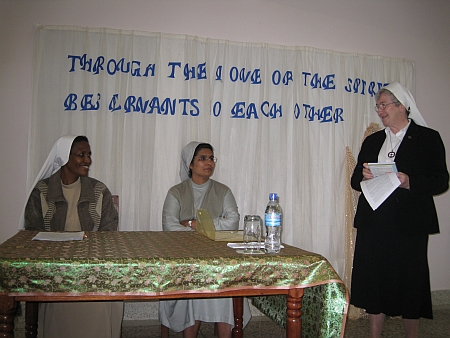 Talks were also given by our Sisters from Rome: on April 26th, Sr. Josephina spoke eloquently on Characteristics of Pallottine Leaders Today and on Saturday Sr. Izabela enlightened us on the Role of the Superior in the Light of the Church Documents, our Constitution and the Writings of St. Vincent Pallotti.

After each talk there were group discussions followed by general sharing. This was a challenging experience as the participants came from different countries with varied experiences and different English backgrounds. However, all went well and there was a really good spirit of cooperation and unity among the participants. For many it was their first experience of living and working in an international community. The liturgy was an enjoyable and inspirational experience as each country shared from their culture and in their native language. 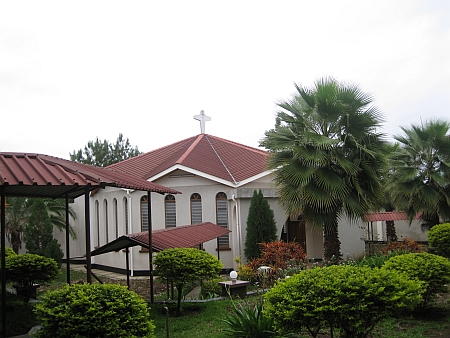 The participants appreciated having an ‘Outing’ on Sunday April 29th. The whole group went to celebrate the Eucharist at the Pallottine Fathers’ parish at Esso, Arusha. As it was Vocation Sunday it was an opportune moment for the Sisters to speak of their vocation and mission. All were amazed to see such a vibrant parish community – about one thousand children joyfully took part in the Children’s Mass. After the Liturgy the Pallottine fathers invited us for a tasty lunch. Then we visited their Delegature House and our Sisters who are living in the Diocesan Leadership Centre and the Usa River Health Centre near Arusha.

On May 1st all enjoyed the feast day of Sr. Josephina, which was enriched by a Cultural Evening of song and dance prepared by different sisters from Tanzania and outside. 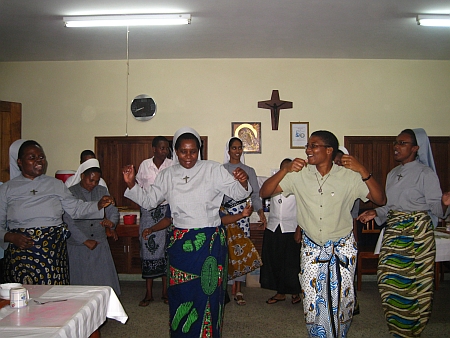 In the evaluation exercise on the last day of the Workshop, May 2nd, there was a lively heartfelt sharing by all. Afterwards, Sr. Izabela closed the meeting with words of gratitude and encouragement. Then in the evening before the short Missioning ceremony, to fulfil the words of Jesus, ‘Now that I, your Lord and Teacher, have washed your feet, you also should wash one another’s feet,’ our Superior General, as a symbolic gesture, washed the hands of all the participants. It was a prayerful and moving ceremony. 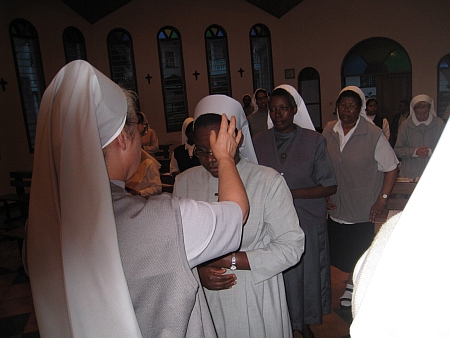 The Workshop was an historical event and a fulfilment of the last General Chapter’s recommendation. It is a tribute to Tanzania, as the host country, and will be memorialised as the first workshop of its kind to be held on African soil. On May 3rd the participants returned to their home countries greatly enriched and challenged, and full of gratitude to God and the General Administration for the opportunity to take part in the Superiors Workshop.