In 1929 the Pallottine Sisters entered the Diocese of Omaha, Nebraska. Father Peter Grobbel (1873-1965) was the pastor of the German settlement of St. Charles at this time. “Peter Anton Grobbel was born on June 12, 1873 in Milchenbach, Westphalia. He was the son of Johan Caspar and Elizabeth Troster Grobbel. He attended colleges in Germany, Italy, and Switzerland in preparation for the priesthood, and was ordained July 23, 1905 in Freiburg, Switzerland. He arrived in the United States in November, 1905, and was assigned as Assistant Pastor of St. Michael’s Parish in Spalding, Nebraska.

The area of Nebraska had a large population of Catholic German emigrants and German-speaking priests were in short supply. Father Grobbel served in various parishes in the diocese of Omaho, and in 1913 he became pastor of St. Anthony’s Parish in St. Charles, Cuming Co, Nebraska, where he served twenty-four years as pastor until his retirement in 1937.” (grobbel.org.generalogy) 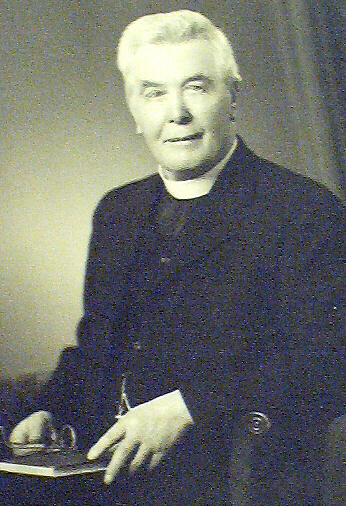 Fr. Grobbel was described as “a broadminded and liberal man, aiding in every way possible those who come to him for advice and help, and his success in his labors is due in a great measure to his zeal and conscientious devotion to duty. In addition to this he is thoroughly equipped with a splendid education in every branch of study, having at his command six different languages in which he is equally proficient.” (History of Nebraska, 1912)

“He spoke German, French, Italian, Latin, and English, but there is no record of what his sixth language might have been.” (grobbel.org)

“Many residents of this area were German emigrants and during World War I, they were treated with suspicion by the non-German residents, state lawmakers, and even the local city councils. In July 1918, the City Council of West Point, Nebraska went so far as to pass a resolution forbidding citizens to hold ’assemblages not in sympathy with the war’ or to distribute literature ‘out of harmony with the war.’

The priests were required to appear in court and show when they came to this country, what places they had been, what steps taken toward completing naturalization and what contributions they had made toward winning the war.” (grobbel.org)

This background gives an idea of what sort of environment the sisters encountered in Nebraska. By this time World War I was history, but prejudice remained very much alive, and war clouds of World War II were beginning to gather on distant horizons. The sisters, however, remained aloof from all of the world events, and consecrated upon their mission to educate the Catholic children of the area.

Sr. Ignatia Havers was the principal of the school, Sr. Kostka Hansen was a teacher there, and Sr. Marcella Handley was the housekeeper. For some time the sisters received no salary.

Sr. Magna Kuhn wrote about the sacrifices that were so much a part of the life at St. Charles: This little settlement was far away from St. Mary’s in Huntington. It was a journey of a day and a half by train. St. Charles was an isolated place of almost all German farmers whose parents had immigrated to settlement many years before.

Rev. Groebbel was a very austere man and rather severe in many ways. He was deeply devoted to his nationality, its language, and its customs. He spoke German almost exclusively. (This seems to conflict with the earlier description of the man, but by this time he was much older, and probably more set in his ways. Also the sisters made no effort to discourage the prevailing attitude of priests of the time, that no sacrifice was too much to ask of them.)

The two Sunday Masses took almost all morning. The sermon was never less than one hour; Mass responses were made loudly by the entire congregation. Evening devotions were compulsory.

The convent was small, and lacked a chapel. Electricity was unknown; oil lamps and candle-stumps lighted the house. The food was simple and nourishing. Sr. Ignatia kneaded bread dough early in the morning before the others were awake. The temperature was never above sixty degrees in either the school or the convent, by order of the pastor.

The school was a whitewashed frame building with two classrooms divided by a hall. A flight of steps led up to this part, though there was no lower floor. Each classroom had a large stove which was heated with large blocks of wood.

School began with daily Mass at 8:00 A.M. and ended at 3:30 P.M. The children lived some distance from the school (up to five miles). Some drove a horse and buggy.

The school was under the Public School authorities in West Point. Teaching was done in both English and German. Fr. Grobbel taught religion daily in the upper grades, and several times a week in the lower grades.

The temperature went down to twenty-six degrees below zero (F). Everything was frozen. Even the water in the pot on the stove was frozen in the morning. Wet washcloths froze immediately. Blizzards raged for days at a time. The snow was high and pressed down so hard that a pick and shovel were needed to loosen it before it could be rolled aside so as to make a path to church.

During the Mass in church on Sundays, the water and wine would have frozen in the cruets if the Fraulein had not waited till nearly the Offertory time to bring them to church. She also warmed them so as to keep them in liquid form till Communion time.

Spring finally came, and with it another catastrophe: dust-storms. The strong winds blew away the topsoil of the freshly plowed land, and also the grain that had sown. After the storm subsided, everything was literally covered with dust. They had to wade through it, and in the house it had to be removed with dustpans.

In spite of difficulties and hardships experienced in St. Charles, the sisters were happy there. It was with regret that they closed the house in June of 1936. Fr. Grobbel was quite distressed at the decision, and pleaded with the superiors in Huntington and Marienborn to keep the school open; but the decision remained unchanged and the sisters move to other apostolates.