When the pioneer sisters arrived in Pittsburgh by train on August 28, 1930, they were met by the Pastor, Fr. Bonaventuro Piscopo. This was the hottest time of summer, and the heat had a suffocating effect on Srs. Vincentia Rogge, Loyola (Eva Maria) Bach, Gonzaga Evans, and Odilia Bonn.

The first school consisted of threesmall buildings, nicknamed the “Chicken Coops.” They were in bad shape, as the Great Depression had kept the parish poor. The sisters had to face problems such as little running water, poor lighting, and an infestation of rats.

Immaculate Conception Parish served the Italian people of Pittsburgh. The quiet nature of the German born sisters found the temperament of the Italians to be quite different from that of their general experience, and this made it necessary for them to make some cultural adjustments in order to adequately serve the needs of such lively folks! 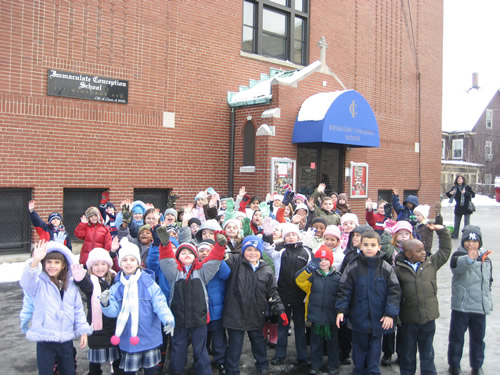 Sr. Concetta Gentile, a native of Pittsburgh, was in her element when she was sent to teach in this school.

Sr. Gonzaga, born in Belize, was quoted as saying, “We had a nice time. We had a small convent, and a nice Community. There was plenty of work, (and} as usual, not much time to do it in.” (interview)

Immaculate Conception school grew rapidly, and more lay and religious teachers had to be added. The construction of the new school caused considerable discomfort to the sisters. They found themselves teaching in rather odd places: sacristy, gymnasium, and even the church basement.

When the convent was enlarged, five rooms had to be evacuated to make room for the addition. The sisters crowded together in the remaining rooms.

Life was never easy there. On Saturday the sisters attended classes at Duquesne University. On Sunday they taught religion classes.

In 1952 several lay teachers left the staff and the sisters had to do double work on a part-time basis.

From 1942-1944 Srs. Igantia Havers and Dominica Senn did social work in the parish. Later Sr. Ignatia joined the teaching staff in the school.

In 1954 it was impossible for the sisters to staff Immaculate Conception School, as it had grown so rapidly. In spite of hardships and cultural differences, the sisters who worked there loved the people of the parish. It was with a heavy heart that the school was put into the hands of others. The people regretted the loss of the sisters, but it was time to move on to other apostolates. 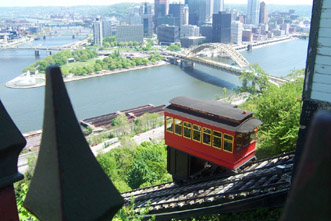