Congratulations from the Superior General (link)

Grateful for the Past – Hopeful for the Future was the theme for the Centennial Celebrations touching every corner of our nation. The celebrations expressed the gratefulness of the Belizean populous, constantly expressed in words and actions and perfected in two moving incidents during the past two weeks in Belize City and from the rolling hills of our Western District, Cayo. 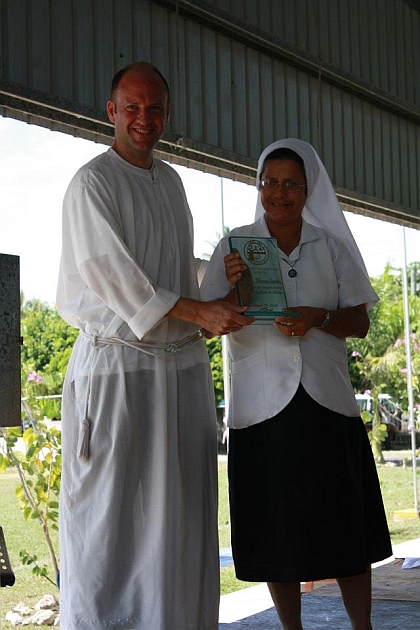 Sr. Consuelo Burgos, Provincial Superior of Pallottine Sisters of Belize (photo above), announced the official opening of the Centennial Celebrations in the midst of more than 600 worshipers representing all of the districts of this beautiful nation. Our Bishop Dorick Wright and his auxiliary Bishop, Christopher Glancy, led the faithful in praise and thanksgiving for the 100 years of service that the Pallottine Sisters have rendered to the nation of Belize. It was truly a masterpiece of praise and thanksgiving to God and to the Pallottine Community. 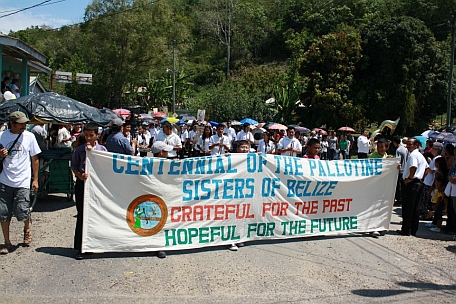 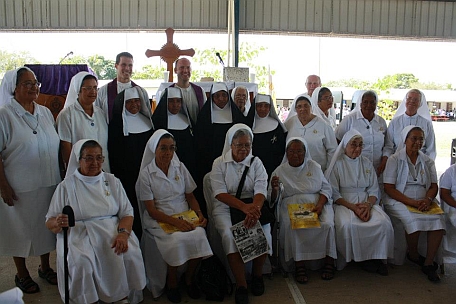 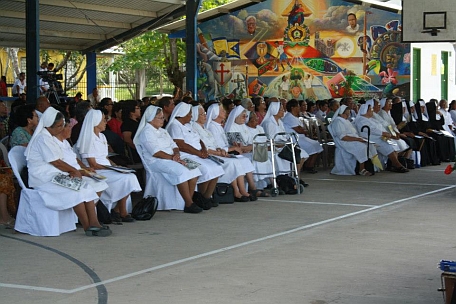 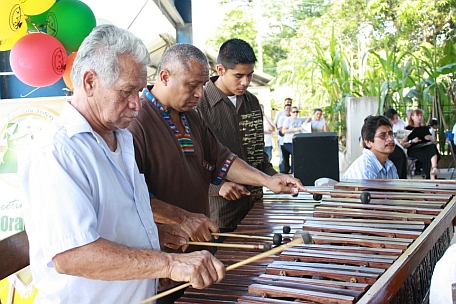 One hundred students of Pallotti High School led the entrance Procession with each student carrying a candle representing a year of prayer, sacrifice, and service of the past 100 years. The Union of the Catholic Apostolate, laymen and women of San Ignacio, Punta Gorda, and Belize City, ushered in the Pallottine Sisters and Clergy to the words of the entrance song, ”Gather Christians.” The tone was set as the congregation joyfully joined in acclaiming their celebration at such a grand occasion. The hymns, decorations, prayerfulness and gratefulness of the congregation, the harmony rendered by the Pallotti High School Band, the reverberation of the Garifuna drums at the offertory procession, and the expression of the dancers were all parts of a great, masterpiece of Thanksgiving to our God. It was at this special occasion that Mrs. Glorisela Torres chose to unveil a plaque dedicating one of the buildings at St. Joseph’s School to the memory of the Pallottine Sisters, who were the first teachers at St. Joseph School. At the end, 100 balloons were released to go wherever they went. We, too, must be open to read the signs of the times and do and go wherever He wants. It was time to feed the multitude and so in biblical terms, they all sat down as the generosity of many hands fed all with our local dish of rice and beans with coconut milk, salad, and chicken.

What more could anyone have asked for? It was an expression of true Belizean hospitality and gratefulness. 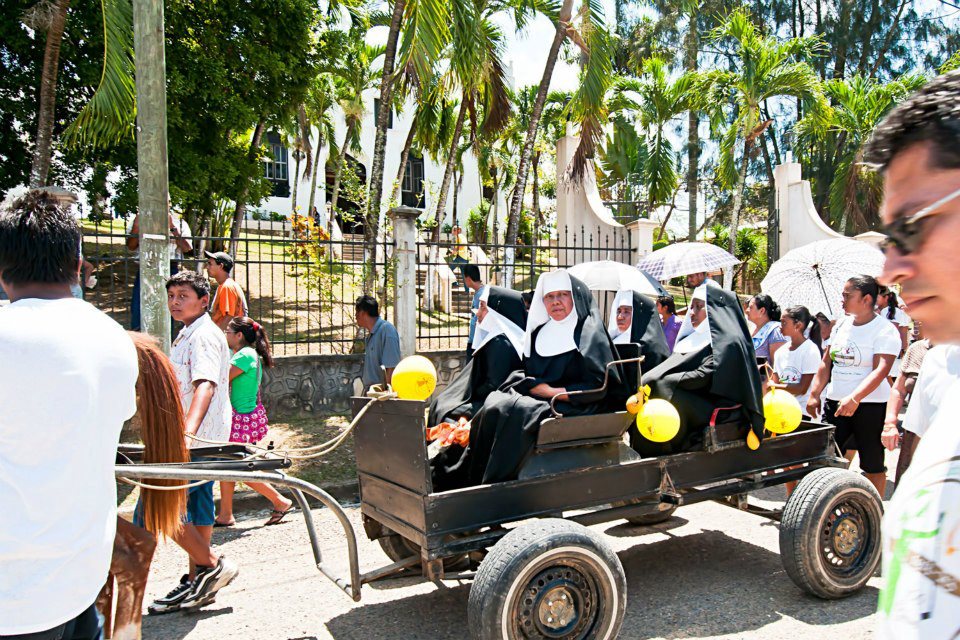 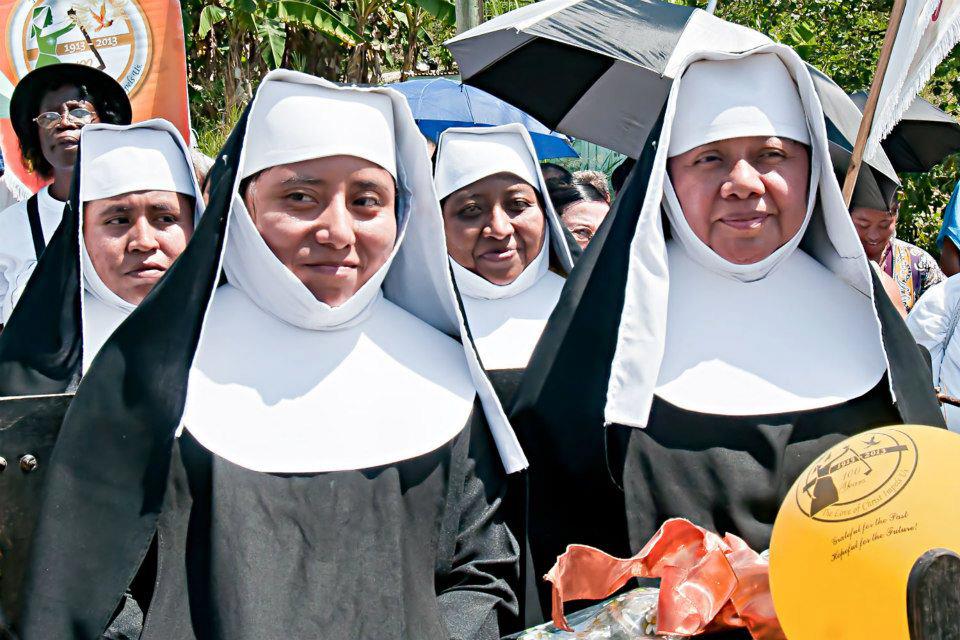 On 17 March, the actual date of the arrival of the Pallottine Sisters on the banks of the Macal River, there was an early rush to the West to see the Sisters land. The early travelers from all over the country boarded buses and private cars and motored their way through the hills of the Western District of Cayo, while the four Pioneer Pallottines, clad in 1913 garb, were being paddled up the Macal River. At two minutes to nine, the fireworks broke the sound barrier and announced the first glimpse of the two dories [small boats] bringing the four sisters to the shores of Cayo. The surroundings were decorated to speak of nothing else but the welcome, gratefulness, love, and appreciation of the people of the West. The surroundings were arrayed with banners strewn across the streets and pine tree arches in festive Belizean style and colorful balloons fluttered in the windy morning to herald a day of celebration. Slowly but surely the dories were moored to the landing, and the paddlers carefully helped the first pioneers to touch this blessed land. Amidst the cheers, clapping, and fireworks, the Sisters were welcomed and seated for a short but impressive welcome program by the Mayor, the Pastor of San Ignacio, Historian, Hector Silva, and the welcoming committee. Soon the horse drawn cart was ready for the journey up the steep hills of San Ignacio on the way to Succotz. In due time, the pilgrims found the hills too strenuous to climb. At the top of the hill, the buses drove them until to Succotz for an emotional welcome by the people. It was now their turn to display their gratitude, as the Succotz Band took off with pride and pomp and led all the pilgrims to the entrance of Benque, where a throng of little angels welcomed the entourage, and the Mayor presented the keys of the city, symbolizing that Pallottines are always at home in Benque. 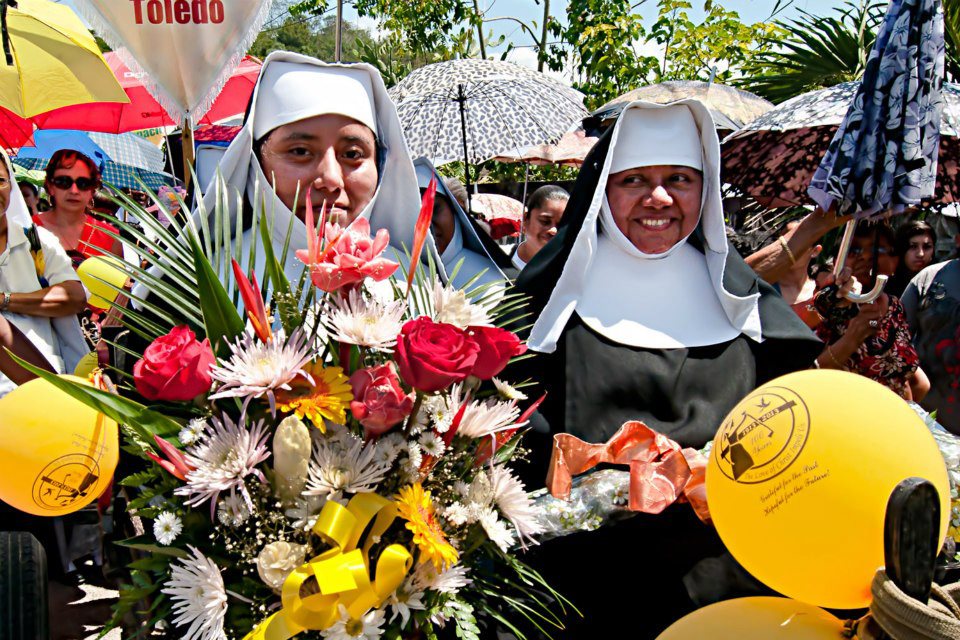 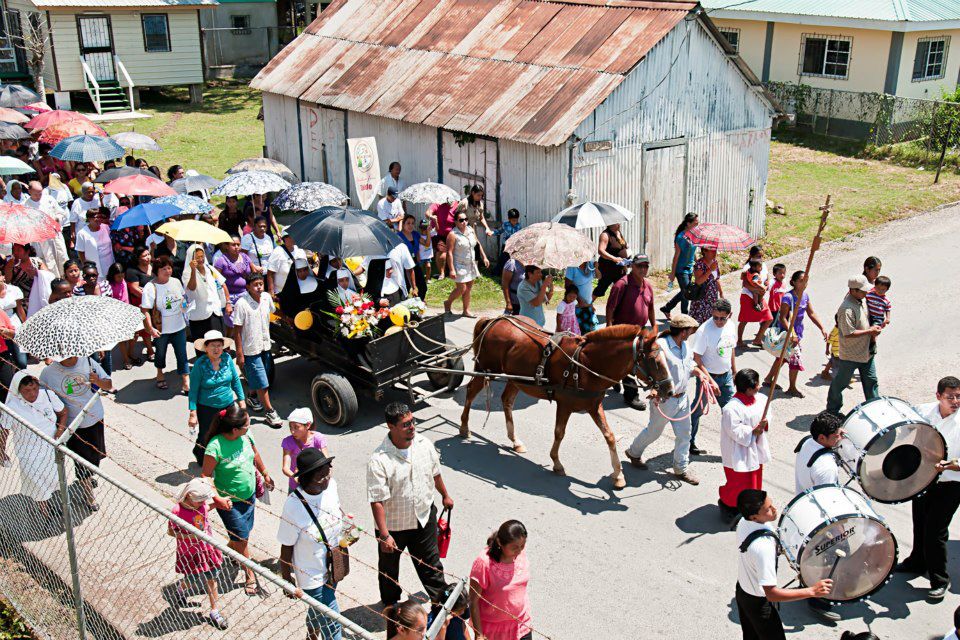 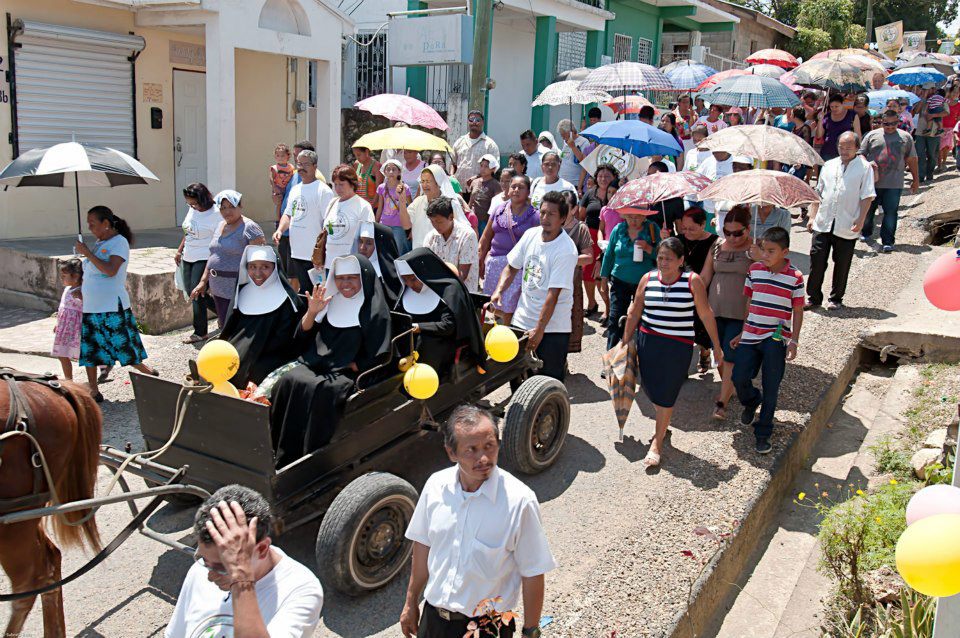 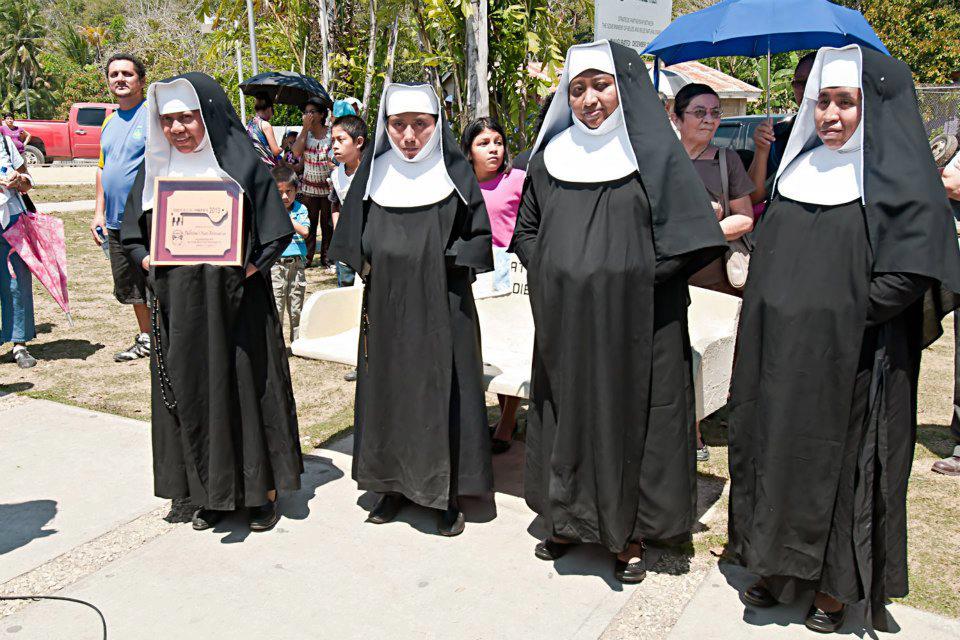 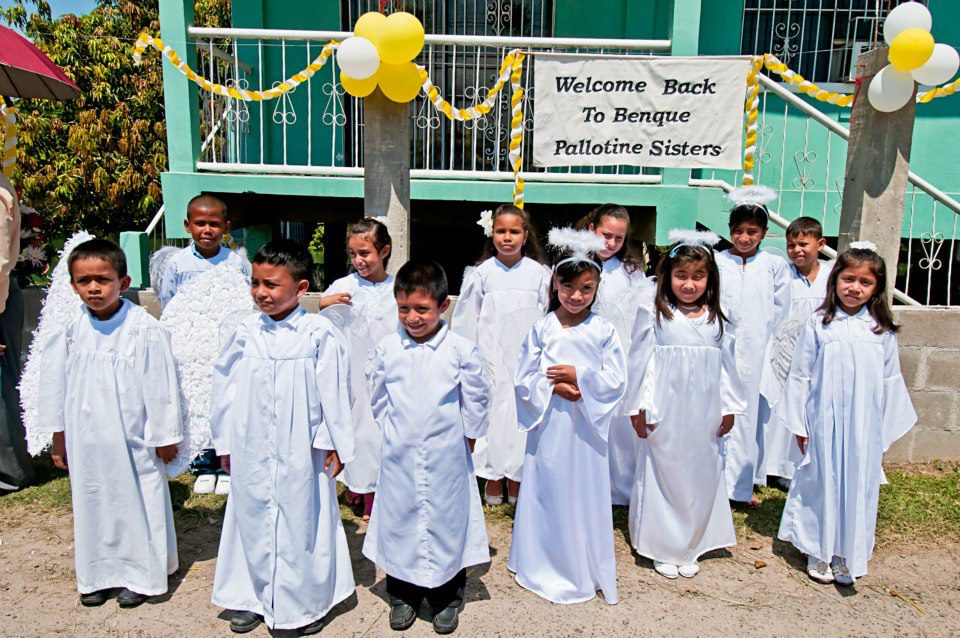 As the procession passed the first convent in Benque, the Sisters paid a visit to the place that was once home to them. This was a very emotional moment as silence prevailed and memories unfurled over the past 100 years. Then the procession proceeded to Our Lady of Mount Carmel Campus where the Holy Mass of was offered. Afterwards, an impressive program of history, thanksgiving, and appreciation too place. It was a beautiful day of Thanksgiving to God and to the Pallottines, who served with utmost dedication, love and commitment to the People of Benque. The whole day was truly a beautiful and unique masterpiece of God’s creation. A feast prepared by the faithful ladies of the Parish ended a perfect day!

MAY OUR GOD REIGN FOREVER IN THIS BEAUTIFUL LAND, BELIZE