“Holy Rosary Catholic Church, located in Clarksburg, W.V., was established in 1906 to meet the needs of Slovaks, Poles, and Slovenians. The parish also included Hungarians and those of the Greek Rite. Construction of the church was completed on September 30, 1909, and the cornerstone laid at that time. In 1984 the church was closed and merged into the Immaculate Conception parish of Clarksburg, and the Sacred Heart parish of Chester.” (website: www.abandonedonline.new/churches/holy/rosary-catholic-church) 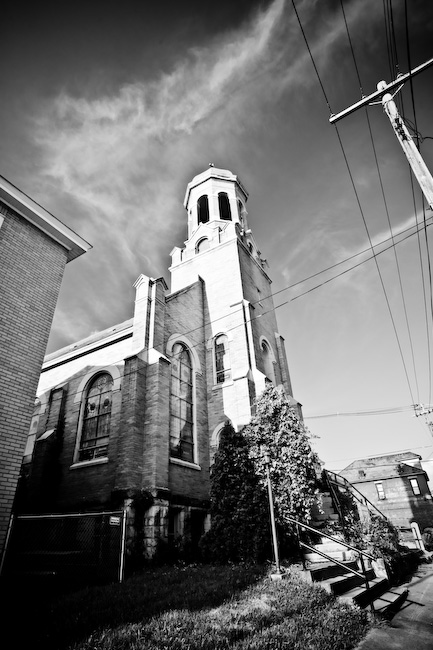 Historically, the Slovak people were extremely nationalistic, and they apparently retained that position throughout their history in the U.S. The first pastor of Holy Rosary Parish, Clarksburg, WV, Rev. Melchior Furst, was pastor of Holy trinity Parish in Struthers, Ohio in September, 1907. Slovak settlers arrived in the Ohio areas in the 1880’s, and they carefully retained their identity. In 1976, they organized The American Slovak Cultural Association, with the specific purposes of “promoting and preserving Slovak language, heritage, and cultural and civic activities. (OHIO Items of Interest: The History of the Holy trinity Slovak Catholic church, Struthers, Ohio, 1907-1999)

“Clarksburg, a city of over 16,000, is located in North-Central W.V. It was first settled in 1764 by John Simpson. In 1856 the B & O Railroad reached Clarksburg from Grafton.” (Wikipedia Free Encyclopedia)

The coming of the railroad opened the way for immigrants moving into the area when industry developed in the early 1900’s. Several ethnic groups immigrated here, and each attempted to keep its unique identity. 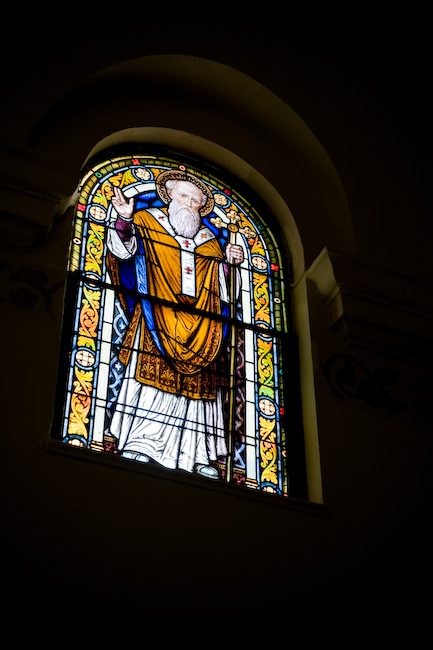 Stained glass from the church.

When the German Pallottine Sisters took over Holy Rosary School in 1928, through the recommendation of Fr. Hengers, they were ill-suited to meet the need of the Slovac people in the parish. The pioneers, Srs. Kostka Hansen, Innocentia Fett, Valeria Frengal, and Gerona Meuz, made a valiant effort to adapt, including teaching Slovak hymns to be sung during Mass.

In the1930 census the teachers were listed as Sr. Innocentia Fett, Theresina Spiker, and Sr. Thea Feilin. Sr. Valeria Frengal was named as the school nurse. In spite of the zeal of the sisters, after four years it was discerned after prayerful consideration, that the Pallottines should move on to other apostolates, and they therefore gave up the school in 1932. 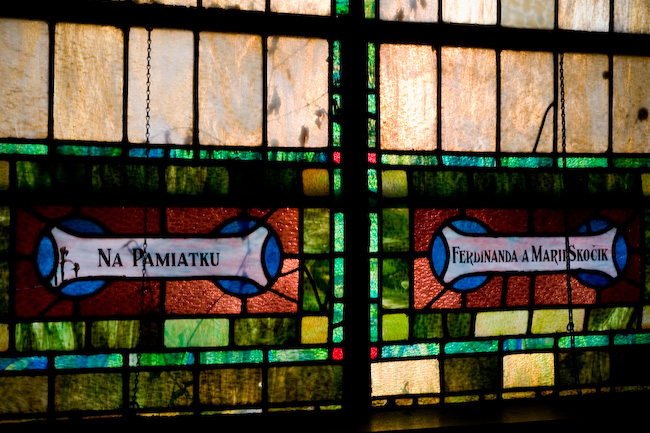 Inscription of the sponsor.

An order of sisters more suited to the Slovak culture took over the task of meeting the particular needs of the people of the parish. These sisters spoke the Slovak language, and were deeply immersed in the culture, enabling them to identify with local needs.

In the meantime, God called the Pallottines to other rich fields of labor, with cultures more similar to their own particular way of life.