From 12-22 April 2011 Sr. Izabela Świerad, our Superior General, accompanied by myself (Sr. Maria Landsberger) travelled to Jekaterinburg in Russia to visit our Sisters. The city with its 1.5 Million inhabitants, named after Tsar Katharina I (1684-1727) and St. Catherine, is situated at the border between the Ural area and Siberia and belongs to the Asian continent. 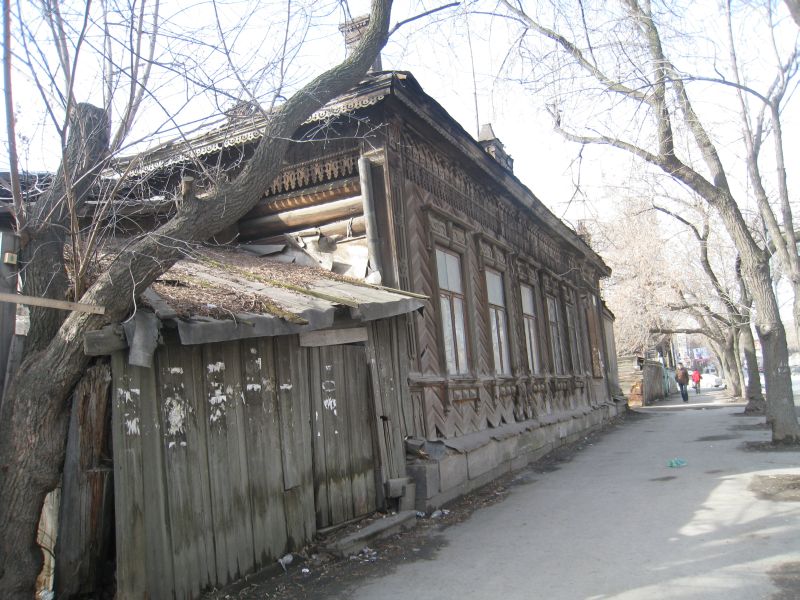 When we arrived at the Sisters´ place on April 12th at 5 am, a warm air received us at the entrance of the house. We got used to sweat in Siberia! The heating systems are not adjustable and one has to save oneself by flinging open the windows. The outside temperature between 8 to 15 degrees Celsius above zero was extraordinarily mild for the season; last year it had been 17 degrees Celsius minus. But a cold wind often made a thick anorak very useful. Our Sisters Katharina Gołub (Ukrainian), Karolina Słomińska (Polish) and Irina Cziczerowa (Russian) live in a simple, but friendly flat on the 8th floor of one of the typical red high-rise buildings. In their small chapel we first thanked the Lord for our good trip. Then they presented wonderful red roses to greet us. In the early morning we had a nutritious breakfast, with the common Russian mayonnaise salad.

Sister Izabela manages well to communicate in Russian, and the three Sisters speak Polish as well as Russian. They told us that in Jekaterinburg and the surrounding area of about 3 hours drive there is only one Catholic parish, which is guided by Fr. Antonj and his chaplain Vasily. The Sisters are the only Catholic religious in this big city, where many beautiful churches with their shining golden cupolas manifest the Russian Orthodox Church.

Interior of an Orthodox Church

After the downfall of the communist system, Pope John Paul II in 1992, asked then Superior General, Sr. Maria Knaus, to send missionaries to help Bishop Joseph Werth, SJ rebuild the Catholic Church in Siberia. Sr. Ingrid Schuler from Germany was the first to go there and help the bishop organize his Curia. Soon after, Sisters from Poland went to Jekaterinburg. Along with the priest they had gathered around 15 Catholics in the new parish. Today it has grown to about 250 members. The church, very tiny between the high-rise houses, seems to be a dollhouse and is much too small for the parish.

We were privileged to experience the faith of the Catholics and the importance of liturgy, relationships, and belonging to the church have for them. Here we met open warm people – a really lively community of faith. While in the streets, the faces seemed to be so serious – marked by an extreme climate or perhaps still a reflection of a repressive regime. Several people approached Sr. Izabela to express their gratitude for the presence of our Sisters and for our having come to visit them.

Fr. Antonj came for a meal and spoke of the challenging situation for the Catholic Church in Russia. Orthodox Christians consider our Church as a sect, and one can hear them say, “We are Christians, and you are Catholics! There is no ecumenical dialogue. The growing Catholic church is careful not to recruit and refers candidates first to the Orthodox church, nevertheless there are more and more young people and adults making a conscious decision to become Catholic. Candidates are prepared during the course of one year and baptised on Easter. This year there were 11 baptisms. We met people who gave a touching witness of their conversion from atheism to faith.

We saw the apostolate of our Sisters: Sr. Katharina, superior of the small community, takes social and spiritual care of the sick and lonely seniors of the parish. Normally they live in alarmingly poor conditions, especially in the villages. We witnessed this during a drive through a bleak landscape: Vodka bottles all along the street side, run down grey buildings or half broken small wooden houses, which once must have been ornate and beautiful. The “System” has not taken care of its country and people…. We witnessed how Sr. Karoline gives catechesis in a Sunday school, which takes place in an old, dilapidated house next to the church. She is very creative in her work with young families. For Palm Sunday she organised an Easter bazar where many home baked Easter lambs and Easter handicraft products were offered, benefitting an orphanage and the Sunday school. Sr. Irina, a native Junior Sister, works in the sacristy and church and also bakes the hosts. She helps the chaplain with a Bible group and gathers young women, sharing the UAC charism with them. She is the contact person for those who come to the church sometimes after a long journey.

The days with the sisters passed quickly. Yet there was time for conversation, prayer with the community, and for meals together. The Sisters also showed us special places in Jekaterinburg, which is a modern University City with an extensive industry. We saw impressive governmental buildings with splendid façades crowned with the Russian Red Star. There are triumphant Lenin Statues in many places. One of the Orthodox churches is called the “blood church.” In 1918 the whole Tsar family had been cruelly killed there. Only 1992, after the fall of the Iron Curtain, the Russians were allowed to build a Sanctuary outside of Jekaterinburg where the bodies were found. On one day we went to see this beautiful place that is like a village of several little churches. The many flowers show that for many Russians the Tsar family members are national Saints. Towards the end of our journey we visited Bishop Joseph Werth, SJ in Novosibirsk. The flight went over Moscow to the central Siberian City. We were happy to participate in the Mass of the Holy Anointing Oils with the diocesan clergy and religious. In the meeting with the bishop we heard about the minority situation, and ecumenical challenges and also about the growing parishes and the search for God in Russia. The Elisabeth Sisters hosted us very cordially and organized some visits for us that included a call upon the Sisters of Mother Theresa. We could see how religious and lay missionaries courageously face this demanding ecumenical, political and climatic reality.

This year’s Holy Week was very special for us. We celebrated the Liturgy of Palm Sunday and of Holy Thursday in the crowded tiny church in Jekaterinburg, where we experienced a prayerful atmosphere. Back to Rome on Good Friday, we once again knew what it means to belong to a Catholic – universal – church, united with people far and near. We thank all for their warm reception, specially our fellow sisters, who made great effort to make us feel well. We wish them God’s blessing, the strength for each one to live their mission with the boldness that comes from “on high”.