VISIT OF THE APOSTOLIC NUNCIO AT LEADERSHIP TRAINING CENTRE FOR THE LAITY – ARUSHA – DECEMBER 3rd, 2018 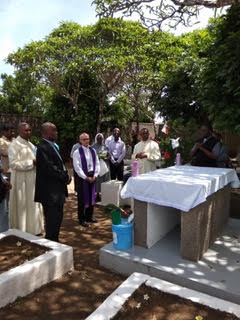 On 3rd December, 2018, we were honored by the visit of His Grace, Marek Solczynski, the Apostolic Nuncio of Tanzania. He was accompanied by His Grace Isaac Amani, the Archbishop of Arusha Archdiocese, Prosper Lyimo, the Auxiliary Bishop, Fr. Simon Tengesi, the Vicar General, Fr. Juvenalis Wengaa, the Secretary General and five Priests, leaders of the Deaneries. 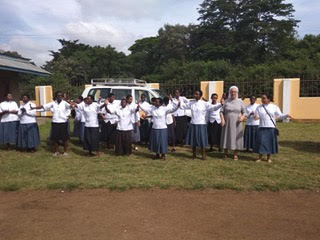 Songs and dances of welcoming were performed by our Novices, who came from the international novitiate to join us. We went to our small chapel to praise the LORD by singing the Magnificat, to thank the Lord for such a great gift to us. The Apostolic Nuncio signed the visitors’ book in our sitting room and our Provincial superior Sr. Basilisa Jacob SAC, welcomed them and conveyed greetings from our Superior General, Sr. Izabela Swierad, SAC. 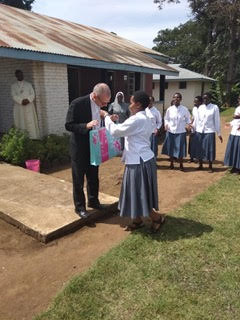 Then a short introduction about the house was made by the community superior. The group walked around the house to get a clear picture of the area. The Nuncio said; “Surely this is a typical Polish style of house building, usually we build concrete houses which can last for long time. (Addressing us, he said) for you, it might be something new but for me it’s common! This house can stay for more than three hundred years without any problem, only few things will need to be changed, otherwise the house is still strong!” After this, the history about the house or rather the place was read by the Secretary General. His grace was very much surprised to hear that about five thousand Polish war refugees had been sent to Arusha! He said it is a good and well prepared history which we need to treasure and to see how we can now reach the needs of the people in this place.

Sr. Anna Kot and the Novices had prepared nice cakes and some drinks which were offered to the visitors. It was a time of refreshment and relaxation for everybody. Concluding the visit, the Apostolic Nuncio gave us a blessing and he also blessed the future of the place. He said; “It is a good place, though facing a lot of challenges, but it can be of a great benefit to the diocese as the Archbishop Isaac Amani had said. What I can do is to bless its future plan and the good intention for it.” After the blessing he continued with the journey to the Polish refugees’ cemetery at Tengeru.

At the cemetery, the Apostolic Nuncio signed the visitors’ book and said a little prayer, blessing the the cemetery. He lighted a candle and put a crown of roses on one of the tombs on behalf of all the others. The Archbishop Amani did the same and all people who were there. 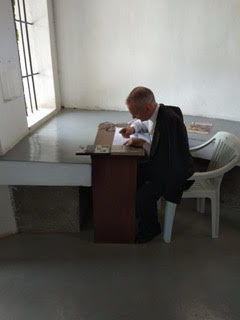 A group of Parishioners from Nambala Parish with their Parish Priest also were there for prayers. Archbishop Isaac Amani addressed them and thanked them for joining them for prayer with the Nuncio. He also thanked the government for taking care of the Cemetery. He went on saying, that we have the obligation to pray for these souls but also to take care of our own souls. We thank GOD for His blessings to our community, may He continue to guide us in His ways.