German immigrants, Bavarian and Hessian, first arrived in Marshall Co, WV in the early 1850’s, seeking a better life for themselves and their families. The land for a church was donated in 1853, with the first rustic log structure, completed in1856; the building also served as a school. The present church building was completed in 1888. The solid wooden pews and the two holy water fonts that are still in the church, were made of lumber hauled to the Settlement by covered wagon.

The church in Settlement

The Settlement was once farming country, but in later years most of the people worked in nearby industries, returning home in the evening. “St. Joseph people are stable folks. Many of the parishioners, and their ancestors, were baptized in this same church, were married in it, and were brought to it for the last blessing before being laid to rest in the nearby cemetery.” (Sr. Vincentia Rogge)

“Go home my friends, and dry your tears,

I must rest here till Christ appears,

And when He comes, I must arise,

And live the life that never dies.” 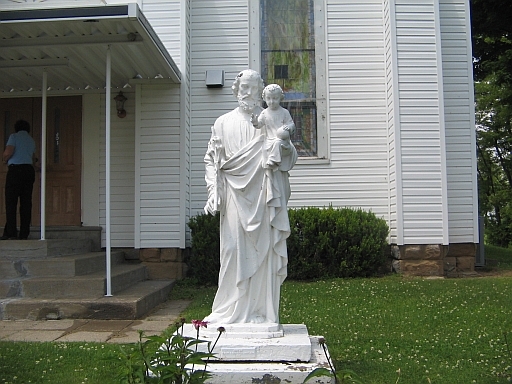 Until recent times the Settlement was isolated, due to its location, deep in the hill country of Marshall County. The first dirt roads through the area were impassable in the spring from heavy rains, and during the snows of winter. The winding country road was paved in 1932 in gravel, and was blacktopped in 1950.

In 1922, Father M. Bucheit, upon the recommendation of Fr. Hengers, acquired the teaching service of the Pallottine Missionary Sisters; being of German origin, they adjusted readily to the German population of the Settlement. Sisters Mary Bede Kurth, and Ignatia Havers were the first teachers, with Sr. Rita ____ as housekeeper.

In the early days boarders stayed with the sisters to prepare for their first Communion. They paid fifty cents a day for room and board. The boys were housed in the rectory.

A contract, received from Mother Cecilia, from Sacred Heart Hospital, Richwood, WV, stated that the sisters’ spiritual needs were to be met by the parish priest. The Congregation agreed to pay utilities for the house, and a monthly salary of $30.00 a month. * This contract was signed July 2, 1923.

(*In 1933, St. Joseph School became a pubic school, and served both Marshall and Wetzel Counties. The teachers were state-accredited. In 1935, the Marshall Co Board of Public Education began paying the salaries of both sisters teaching in the Settlement.)

The school retained its German identity for many years. In 1934, Basil Lockhart wrote, “The fatherland of the early pioneers is not forgotten, as the German flag hangs side by side with the stars and stripes. In fact, until the present day some recitations are in German and some in English.”

Although the retained strong German connections, the people of the Settlement were loyal Americans. From WW I their service record boasted thirty-two stars, one of which was gold.

In 1944 the house chronicle related that “fifty-one candles are burning on the side altar every third Sunday of the month, one candle for each boy from St. Joseph’s in the service.”

Pieta in the Settlement’s church

In 1928 Srs. Ignatia and Ludwiga received their American citizen diploma. The trip to Wheeling took three days, since they had to travel by buggy.

The winter of 1934 was the coldest on record at the time. For two weeks in January the temperature remained at zero or below and the snow was so deep that the pastor and the sisters were snowbound. Local neighbors provided milk, butter and home-baked bread to keep them in food and drink.

On May 17, 1937, Fr. J.P.T. Holzmer, a native German, and pastor of St. Joseph Settlement, was instantly killed in an auto accident near Ivydale, in Clay Co., WV. The parishioners kept an all night vigil with the body in the church on Thursday, May 20. A Mass Solemn Pontifical Requium Mass was sung on Friday. The First Communion children, to whom he had given the Eucharist the day before his death, marched in his funeral procession, and the graduates, who were to have received their diplomas from him, stood in mourning instead.Fr. Holzmer was buried, at his request, in the St. Joseph Cemetery. A large monument was erected there that depicts the dying crucified Jesus, the Blessed Mother, and St. John. 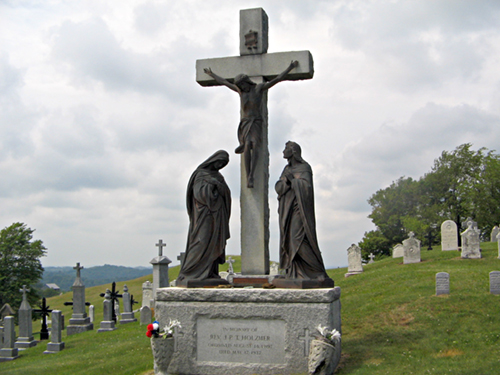 In memory of Fr. Holzmer

For many years the sisters climbed the hill from the convent to the church three times daily to ring the angelus bell. In 1971 an automatic system was installed.

In later years, Marshall Co did an extensive amount of consolidation in its school system, and many new schools were built. Because of this consolidation and a shortage of personnel, the Pallottine Sisters withdrew from St. Joseph’s Settlement in June, 1978.

One German born sister, Sr. Vincentia Rogge, taught in the little school for thirty years, and after retiring from teaching, she turned cook and housekeeper for several additional years. For her 90th birthday celebration she wrote,

Some day it will serve me kindly,

But, thank you, God, most heartily,

For letting me be just ninety!”