History of Ukraine – a cable shortcut

In the first millennium B.C. different parts of the Ukraine were under different rules, such as Cimmerians, Sarmatians and Scythians. When the time turned to the 1st millennium A.D, it was ruled by Goths, Huns, Bulgars, Avars, Khazars and Magyars. After the 4th century Slavic tribes were settled there. In that time Kiev was its major town. The Kievan power was ended in the middle of 13th century after the Mongol conquest. 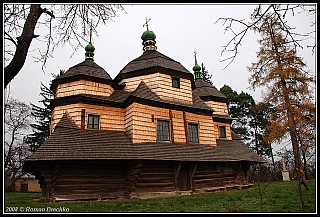 Pearls of regional architecture. Komarno, a city founded in 1324. In the center of town is an old Polish Kostel (Catholic Church), as well as an old wooden Orthodox church complete with ancient icons. Photo by Roman Brechko.

The territory was ruled by Lithuania in the 16th century and in the 17th century it was ruled by Poland. Ukraine was under the Russian rule in the time of 18th century.

The Ukrainian National Republic was established in the year of 1917. In the time of 1918, it declared their freedom from Russia. But again in the very next year it was re-conquered. Ukraine became a part of U.S.S.R. as Ukrainian Soviet Socialist Republic in the year of 1923. Poland held the northwestern region of the country from 1919 to 1939. More than five million Ukrainians died of hunger in an unparalleled peacetime tragedy under the Soviet leader Joseph Stalin in 1932-33. Ukraine was re-occupied by the Soviet Russia in the year of 1944.

By the way, Ukraine was the site of the Soviet built nuclear power plants and in the year of 1986 the Chernobyl accident took place in that territory.

After centuries of moving from hand to hand, build-up of foreign cultures, a very complicated human relations and relations with neighboring countries, in 1991, Ukraine regained its independence. A lot is to be made up from both the material and spiritual side. You may have to future generations, to make up for lost time – provided of course that the fate of Ukraine will always remain in her own hands. 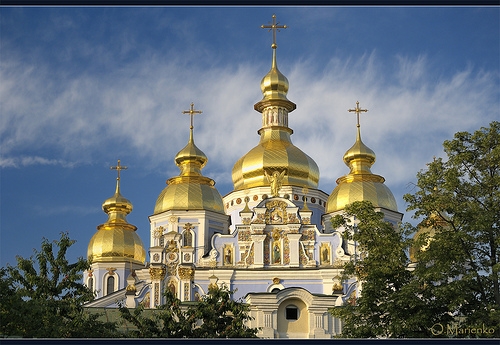 An example of how the Ukraine has been recovering from her cultural fall. Monastery was originally built in the Middle Ages. The exterior of the structure was rebuilt in the Ukrainian Baroque style in the 18th century while the interior remained in its original Byzantine style. The monastery was demolished by the Soviet authorities in the 1930s, but was recently reconstructed after Ukraine gained its independence. There is plenty of such cases.

Worth mentioning is the reason why all countries of the region got under the power of Russia after the World War II. The post-war division of Europe took place in Yalta in the Crimea in 1945 where Joseph Stalin, Winston Churchill and Franklin Roosvelt held the conference . With Soviet troops in most of Eastern Europe, Stalin was in a strong negotiating position. Roosevelt and Churchill tried hard to restrict post-war influence in this area but the only concession they could obtain was a promise that free elections would be held in these countries. Once again, Poland was the main debating point. Stalin explained that throughout history Poland had either attacked Russia or had been used as a corridor through which other hostile countries invaded her. Only a strong, pro-Communist government in Poland would be able to guarantee the security of the Soviet Union – according to Stalin. The Polish people, deep in their hearts, preserve the betrayal of aliances: England and the U.S.A. as a painful lesson. They learned: if you have to count, count only on yourself. “Trust” seems to be a keyword to understand us better.

Remnants of communism in lives of very ordinary people.

All this is the background to the ordinary life in so called “satellite countries” of the Soviet Union after the war. Poland, Belarus and Ukraine went through it in a different way. Poland, never humble towards Russia, managed to preserve her religion and inner independence, ending with the peaceful revolution of “Solidarity” in 1989, which gave freedom to all supressed countries in Europe, including…Russia. Belarus and Ukraine had their own very difficult history under Soviet’s supression. Now they reached the starting point for the new chapter of their history, having opportunity to return to their spiritual roots and to discover the richness of their own past, not running away to the nationalizm. Absorbent catching up with Europe in the economic sphere, does not exempt any person or nation from extracting spiritual beauty from the shadows, which is ultimately about the greatness of the nation. Freedom and democracy, so desperately regained, are the values that now have to be laboriously shaped. We have to learn how to use freedom in our personal life and how live democracy in everyday events. After the first years of euphoria from the recovery of freedom we can see, how much is yet to come. Each of us is marked with the flaw of generation – without exception: ordinary people and extraordinary as well, and the politicians, and the clergy, including us, the sisters – without exception. Awareness of this should accompany us when we go to the neighboring countries with so-called re-evangelization. We are facing people wounded alike. We need their forgiveness for the sins of our fathers. And we offer a gift of reconciliation for the historical wrongs done to us, behind which hides mad politicians or dictators – not so much a concrete person standing in front of us. Building bridges in politics, shifting bridges between the Churches (see the Orthodox and Catholic), the bridge from man to man – only this way can come Christ into our life and remain in our midst. This means the new evangelization today. We need it also in our own home within arm’s reach. Our, Pallottines, presence there is not exactly to convert people, but to help them as well rediscover spiritual ground of their wonderful and rich culture, so much destroyed during the time of communism.

There are beautiful people in the East. We are not in the position of giving them something. Deep hunger for spiritual life, sensitivity to the surrounding beauty, especially music, natural ability to contemplation are their natural equipment. One can discover it in the literature, music and art of the region. Saying that I mean Russians, Belarusians as well. Stalin through his politics committed genocide, murdering milions citizens, and murdering spiritual life of those who remained. All that make us humble dealing with the people of Ukraine, Russia and Belarus, the nations full of anonymous martyrs. We are the one who receive from them much more than we give out.

The map of the contemporary Ukraine.

Our modest presence in Ukraine

Zhytomyr (the first Catholic church founded here in 1225) was the first city in Ukraine where sisters arrived in 1989, when only borders of Ukraine and Poland were opened to foreigners. Initially, Sr. Consolata Majewska, the Missionary Procurator in the Province at that time, joined later by Sr. Gabriela Olecka, travelled several times to Zhytomyr and other places to see the possibilities of future work for the sisters. The initiative of inviting sisters to Ukraine laid in Fr. Aleksander Milewski, SAC. Presently there are two sisters: Sr. Julia Wolska and Sr. Galina Klimenczuk. The sisters run a day-room for children at our house; they have catechesis for kids, youth and adults, and a parish theatrical group; they take care for the sick and elderly persons; they formed an ecumenical community for handicapped people with a formation program based on the Pallottine charism; young people participate in the Bible sharing.

Kamienny Brod. Pallottine sisters have been in the parish since 1994. Currently there are two sisters: Sr. Anna Karpinska (Polish, 15 years of work in the Ukraine) and Sr. Galina Szpilowa (Ukrainian of Polish origin). Sisters lead catechesis, four rosary prayer circles and sacristy; they care for the sick and the elderly people (about 40 persons) and run a charity kitchen, where meals are prepared for the poorest inhabitants of the Ancient Brod.

Korosten (the first wooden church built in 1602). The sisters have been working there since 2003. Currently, there are: Sr. Galina Soroczyńska (Ukrainian of Polish origin) and Sr. Danuta Jarosz. Sisters lead catechesis and meetings for children and young people in the oratory; they are responsible for the sacristy at the parish church.

Jagiellonian Grodek (the beginnings in 1213) – our presence since autumn 2005. Currently, there are two of our sisters: Sr.Teresa Grazul and Sr. Ludwika Jastrzębska. Sr. Ludwika leads catechesis for children and youth, runs a community of families. In addition, she commutes with the catechesis to two points in Lubienia and Komarno, 30 and 20 km away from Grodek. In turn, Sr. Teresa, a nurse by profession, works in sacristy and visits the elderly and the sick in the parish.

Photos to come to that part.

Historical part – based on info from Wikipedia and a Polish mission’s bulletin “Posylam was”, a special jubilee edition.

Information about the sisters in Ukraine based on Sr. Marcelina Chetnik, SAC, “Guide tour on sites of our presence in Ukraine” (unpublished compilation for private use).

Photos from the provincial archives and internet sources.