History of the Morgantown Hospital

on this site on High Street was opened around 1900 and was known as the City Hospital. It was later purchased by Dr. Edgar Frank Heiskell, and renamed Heiskell Memorial, in honor of his mother, Winifred Powell Heiskell.

Dr. Heiskell was born December 30, 1890 in Tucker Co, WV, and died October 8, 1962, at Vincent Pallotti Hospital, as a result of a fire in his home. The fire was caused by Dr. Heiskell falling asleep while smoking in bed. He was Baptized at the hospital shortly before he died.

In 1950, Dr. Heiskell had sold the facility to the Pallottine Sisters, and it was renamed Vincent Pallotti Hospital. The sisters sold the hospital to Monongalia General Hospital in 1972, and it ceased operation in 1977.

Hospital in Morgantown opened in 1913

The Monongalia General, located in Evansdale, a suburb of Morgantown, adopted a logo of two crosses merging to form an M at the top.

This symbolizes the combining of the two facilities: Vincent Pallotti and the General Hospital. Something of the spirit of the sisters survives through the symbolism of the crosses, and in the memories of Morgantown residents.

The building that was once Vincent Pallotti Hospital was converted into an apartment complex. The lovely summer house and the grotto are long gone, and the space has been filled with cement, creating a parking lot for residents of the apartments.

History of the Pallottine Sisters in Morgantown

Sr. Amalia Bauer and a delegation of sisters traveled from Huntington to inspect the Heiskell Memorial Hospital at the urging of Fr. Eugene Jacobs. They returned home expressing enthusiasm for assuming this new apostolate.

On January 2, 1950, Srs. Pia Polke, Germana (Germain) Kroetz, and Sixta Ruether arrived in Morgantown to begin converting the bankrupt facility into the modern Vincent Pallotti Hospital. They were accompanied by Srs. Amalia and Madleine Lopez. 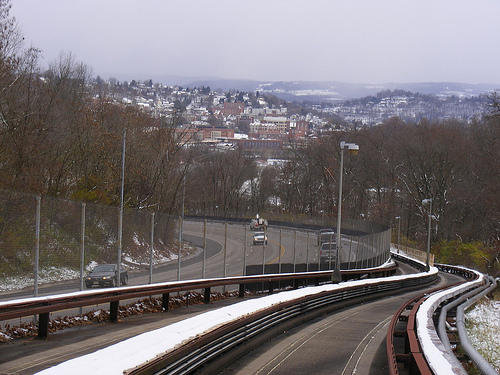 Going down to Morgantown

This had been a forty-eight hour transfer for the pioneer sisters, and therefore they must have been a bit breathless when they reached the elevated hills of Morgantown.

Heiskell Memorial Hospital was known as “the Rat Hole” to the residents of Morgantown, and sixteen patients were still there when the sisters arrived. The place was dirty and rundown; it needed painting, the furniture was worn and old, and there were practically no supplies. Patients were bringing their own bed pillows at this time.

A university professor came in the evening to do the upholstery, auxiliaries made new drapes, and the Knights of Columbus repaired the furniture. The Ursuline Sisters from St. Francis School were also helpful in many ways to the Pallottines.

Within a year’s time the hospital was filled to capacity. The sisters originally lived in the hospital, and now needed to seek new quarters. They purchased one of the surrounding houses for a convent. By the mid 1960’s they were living in four different houses near the hospital.

In the beginning the hospital had a training school for nurses. There were several students, and all transferred to St. Mary’s School of Nursing in Huntington. 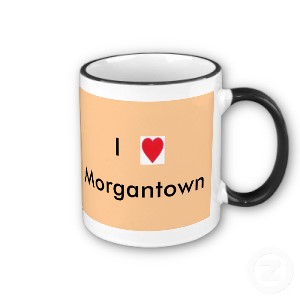 Hardships were numerous, but one problem proved to be humorous, after it was solved. The dietitian thought the sisters could not eat meat, and they were served cottage cheese and eggs until the mistake was discovered and remedied.

Sr. Germaine recalled that Morgantown was very poor at first. One evening she found a pot of beans on the stove, and was so hungry that she ate most of the beans. She said, ”I don’t know what the others ate!”

The lobby of the hospital contained a large statue of the “Mother of Grace,” donated by Fr. Jacobs, which was always beautifully decorated On the wall was the inscription in gold letters: “The body is often curable; the soul is ever so.” 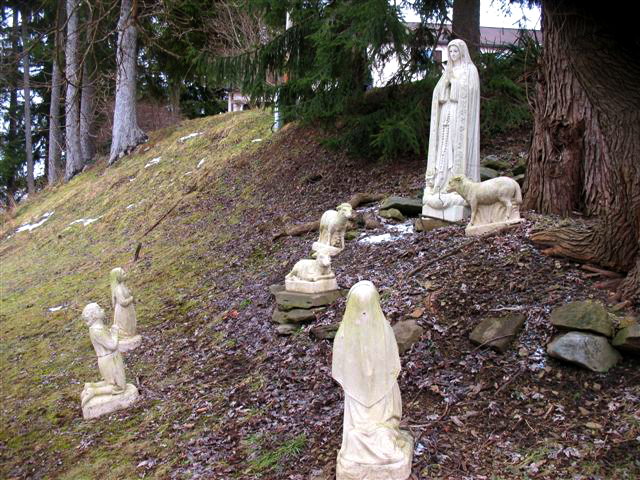 The Fatima group of statues

Outside the hospital were full-sized statues of the Fatima group. They were partially financed by donations, but the biggest sacrifices were made by the sisters. They did extra duty for nurses who could not come to work, and the money was given toward the purchasing of the statues. (These statues are now in Buckhannon)

The chapel, Our Lady of Grace, on the second floor was about the noisiest place in the world! It faced the highway, which was the only route for the coal trucks. All day long they traveled up and down the road, continuously emitting a loud banging noise. 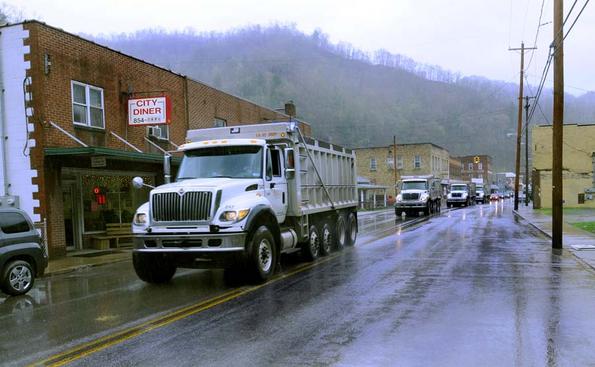 The “music” from outside

Poor Fr. Leo Cresico, O.F.M., the faithful hospital chaplain for many years, attempted to shout above the noise of the trucks at services, but he was no match for the constant clamor outside the chapel windows!

In 1950, a record-breaking snowstorm hit Morgantown. In some places the snow reached the second story of the buildings. An expectant mother was transported to the hospital lying on a piece of tin hitched to two horses. The child was born at Vincent Pallotti Hospital, and the mother and baby suffered no ill effects from their precarious mode of transportation! 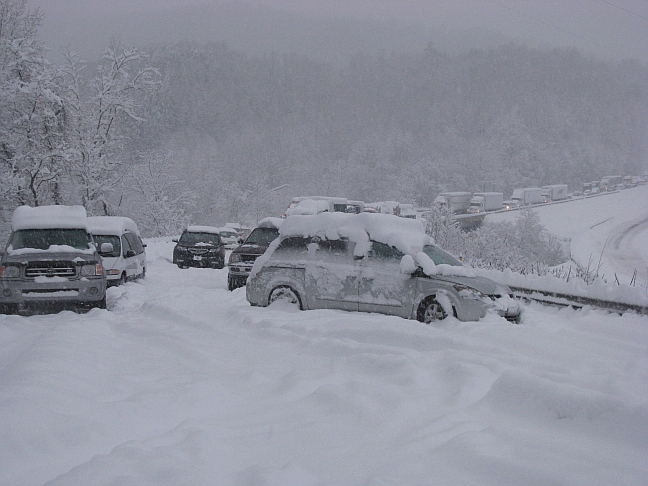 Snowstorm in the area of Morgantown

In addition to hospital work, Srs. Pia and Avellina Hick made the fifteen mile trip to Bretz, near Masontown, W.V. to teach catechism on Sunday mornings. The Mayor of Masontown, who is now in her 90’s, recently related that Sr. Avellina taught her to play the organ.

The sisters worked hard in Morgantown area and built an excellent reputation for the hospital. The spirit of charity prevailed, and accomplished much toward the creation of a spirit of good will in the city. Religious prejudice was very much alive and active in the area, as at this time in history, churches of different faiths did not cooperate with one another, but instead worked against other faiths. Rev. Fr. Peter Flynn made rounds at the beer joints, reminding his flock of their religious obligations. He did a great deal to dispel prejudice, as he came into contact with many men of different faiths. 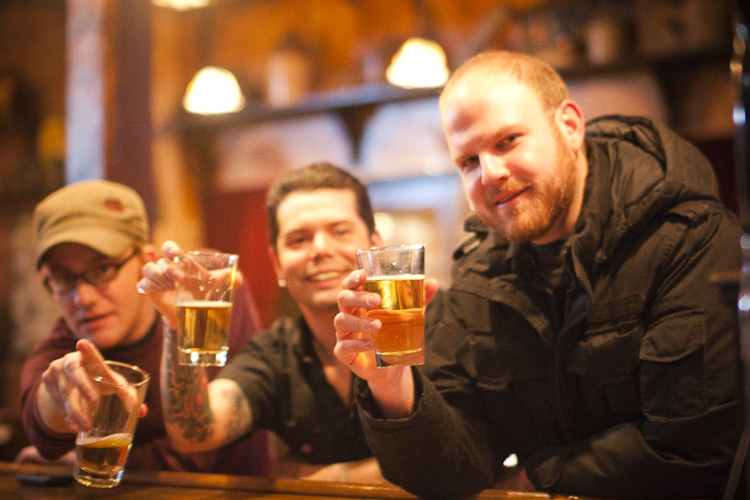 As the years wore on, the hospital building became outdated, and needed to be replaced. The Pallottines could not staff a new hospital, and on March 1, 1972, it was turned over to Monongalia County, and the sisters left Morgantown.

On the very top of a high hill in East Oak Grove Cemetery located in South Morgantown, there stands a huge monument to Mary Louise Rosati, R.N., who was once a nurse at Vincent Pallotti Hospital. One of the four photos on the stone shows the lady in her uniform with Sr. Pia, who was the administrator of the hospital for several years.

Much of old Morgantown can be viewed from that hilltop, including my old family home on River Road. It seems like such a wonderful place for a photo of Sr. Pia, as she was a beloved person in the area.

View from the hilltop on Morgantown

Being a free spirit, full of creative energy, and quite impulsive, she decided on the early April day before the dedication of the statues in the grotto that we should plant flowers there. The two of us crawled around that morning, planting pansies, and other spring flowers. The next day we had a wet snow, and the little flowers peeped through the white covering as the Bishop blessed the statues! 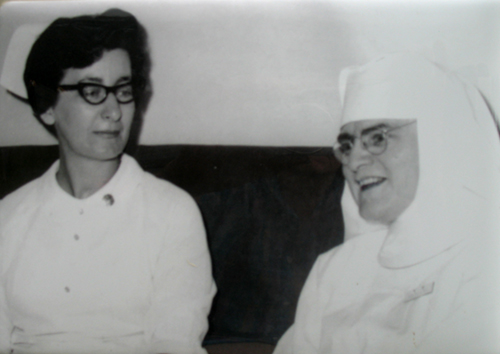 Sr. Pia had a voice like a little silver bell before the cancer robbed her of it. I could almost hear her laugh in the wind as I stood on that hilltop! She called me her little protégée, and we were lifelong friends. She encouraged and supported me in my discernment of a religious vocation. Although the years separated us in or place of residence, our friendship deepened with the onslaught of time.

She died in Germany while visiting there, and is buried in the convent cemetery in Marienborn. It is fitting for her photo to survive on a hilltop in Morgantown!

View from Cooper Rock nearby Morgantown.