Pallottines came to Russia not because they had planned so. History of our call to our brothers Slavs confirms the truth about God’s thought over the world. It set up atypically. The Holy Spirit breathed new sending into hearts of the sisters gathered on the General Chapter in 1992: „Go and proclaim…” further than it was till now. During debates and sessions we intensely reflected over how to meet the present needs of the Church and the world. We were not short of ideas but God gave us his own sign.

And then occurred the unusual, unexpected meeting. We were invited to the private audience to the Holy Father. Our capitular community joined an unknown to us bishop with his chaplain. Soon it turned out that this was the first bishop, appointed after a 70-years pause, the shepherd of the greatest diocese of the world – the bishop of Siberia, Joseph Werth. In the conversation with John Paul II he asked for priests and sisters who would join the huge task of rising the Siberian Church from ruins. The Holy Father introduced the Bishop to the General Superior, present on the audience. There was her then, Sr. Maria Knaus.

Sr. Maria Knaus did not drop the opportunity. She invited both priests from Russia to the Generalate for supper. With this gesture she passed to us a signal that the request of the Holy Father was a request of Jesus to her. It become very clear – the time is done, it is necessary to go into regions hitherto inaccessible for political reasons. Catholics in Russia wait, now then God in them waits too.

Unfortunately, we gathered for the mission for six years. Jesus found however a manner to hustle us. In 1998, on last days of August, first three sisters: Agata Browarczyk, Karolina Słomińska and Mirosława Włodarczyk left at last from Warsaw via Moscow for Ural Mountains – to Yekaterinburg. The train journey lasted almost two days and two nights. On September, 1st began for us the new – on the far-away soil, almost always penetrated with the coolness. 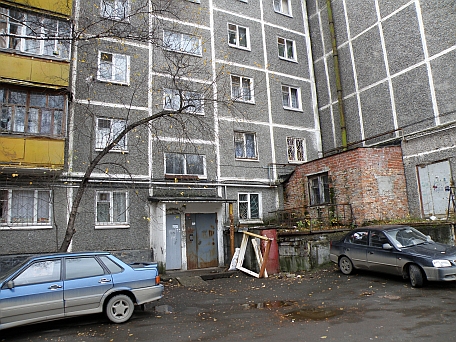 The first stop in Yekaterinburg

We lived in a rented flat at Jasna Street, in the block built from concrete-plates. To the down town, where was our parish church, we got out and away much too long. This was not however the only reason that we changed the flat after three months. After exciting adventures and the novenna to Our Founder we succeeded to find a new place for living, almost in the last moment before an eviction order. In the first week of Advent we were already elsewhere. Now from our new brick house we had only a quarter of an hour to get to the parish. Of course we knew, that this is the address only temporary and first or last it will be necessary to think about the buying of our own flat, so that we could concentrate mainly on work and not only on problems of the tenant against the hirer. Plans materialized quickly. Thanks to the help of the Generalate and the German Province we could purchase a maisonette in the convenient point of the city. In June 1999 we moved to the newly built block of flats at Bieliński Street. We are there today.

Together with the Lord…

We were not short of work. The church was not yet polished nor equipped. About the heating we did not even dream. In the provisional sacristy, with difficulty one could detect the altar linen, vestments or some ornaments. And no shops with devotional articles in town. The building close to the temple – devastated, with moulds on the walls – served as a temporary „presbytery”. It lasted until formalities to recover it for the parish ended up. We managed to clear one room for the kitchen, and the other little one for religious education. But what for the little room, when there are no children at all? Parents did not bring kids with them to the church, because they did not know that children could also attend the Mass. And there was not many adults either. The first Sunday’s Eucharist, in which we participated, gathered only just about twenty persons.

We divided between ourselves assignments. Sr. Agata saw about with the sacristy. By day she arranged things, cleaned up the church, got thoroughly clean fitments, helped in the kitchen, and at night sewed altar-cloths, purificators, albs, etc. Sr. Karolina initiated action of gathering children for the catechesis. She was in this indefatigable. All evenings she called up parishioners, inviting them to come to the Sunday school with their children. Sr. Mirosława prepared adults to sacraments: to the baptism, confession, marriage. When the group of students gathered began regular discussion meetings. 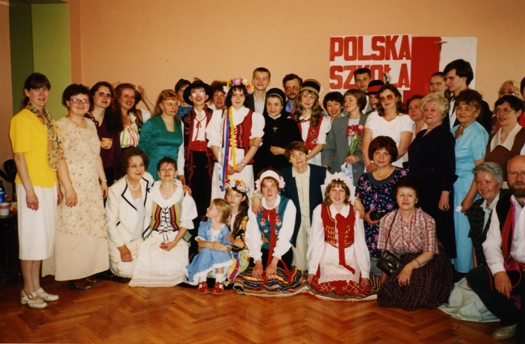 Sr. Mirosława with the students of Polish School

Already on first days of our stay the local Polish community abroad, so called “Polonia” (descendants of Polish people sentenced to exile in Siberia by the tsar during the national bondage in the XIX c. and later under Stalin; they stayed in Russia for generations, having been always faithful to their Polish origins and faith in their souls) realised that appeared for them the chance for the spiritual and mental return to the motherland. They wanted very much to create the community, wanted to speak in the language of their own ancestors, wanted to find in themselves lost in the difficult history the national identity. Strenuously they asked for organizing the Polish School. After all they waited for it over 70 years! And God heard them. Succeeded to obtain both the agreement of our superiors on initiating of this activity, as the confirmation of the school by the Department of the National Education in Warsaw (responsible for “Polonia” abroad in different countries). So Sr. Mirosława became a teacher. Seven years of the everyday work brought good fruit. Polish colony not only herself integrated, strengthened, grew, but also opened to all who wanted to join them. The school became a place of real ecumenism. Catholics, Orthodox, Lutherans, Musslims and agnostics – all together experienced a gift of the community, drawing from one source of culture and the Christian spirit. Many people, thanks to the school, found their way to God.