“Send laborers into your vineyard and spare your people”.

The 7th of December was a very special day for the Missionary Sisters of the Catholic Apostolate in East Africa, as they witnessed the first commitment of five Novices from their International Novitiate in Arusha, Tanzania. One Novice is Rwandese and four are Tanzanians. Sr Honorata Lyimo, a General Councilor, was delegated by the Superior General, Sr. Izabela Świerad, to receive their vows in the presence of Sr. Basilisa Jacob, the Provincial Superior of the English/Tanzanian Province and Sr. Liberata Niyongira, a General Councilor, representing Sr. Angeline Kambugu, the Regional Superior of Rwanda/Congo Region. 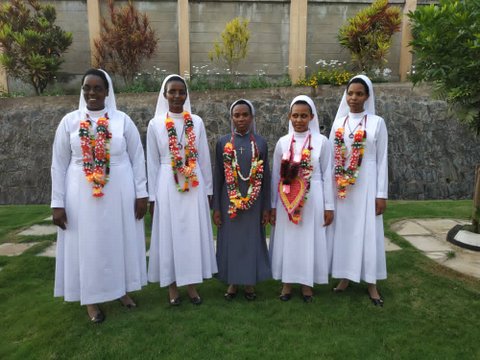 The ceremony began with a joyful procession from the Parish Hall to the Parish Church of St. Noe Mawaggali, Poli Singisi. Fr. John Onna SAC, the Delegate Superior of the Pallottine Fathers of East Africa, presided over the Eucharist of the Solemnity of the Immaculate Conception. Thirty-three priests concelebrated the Mass – among these were the Vicar-General of the Archdiocese of Arusha and five Diocesan priests, nineteen Pallottines, four Spiritans, three Franciscan Conventuals, one Holy Cross and one Assumptionist priest. Many Sisters from other congregations joined our own Pallottine Sisters for the celebration. The small Church was fully packed, especially by the formees from the neighboring congregations who almost filled one side of the Church! Their spirit of collaboration and participation enhanced the Liturgy with joyous songs and dance.

There were many inspiring incidents that flooded our hearts, but the one that stands out for many, was the presence of the Maasai in their colorful garments. Newly professed Sr Rebecca is our first religious from the Maasai tribe. It was truly a memorable and grace-filled day for all present. The Vicar-general and his fellow Maasai priests stood up together with Sr. Rebecca’s family showing a strong sign of togetherness in supporting her, and, also, in promoting more vocations from the Maasai land. 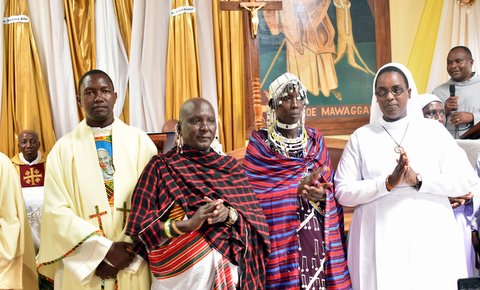 In the homily Fr Onna outlined the attributes of Mother Mary who was chaste, obedient, and lived a simple life, in line with the religious vows which the Sisters made. Our Blessed Mother is model and exemplar of all Religious, as shown by her humility and obedience to God’s will. He highlighted that Religious are called to attain holiness by their way of living, and by responding, in the best way possible, to the needs of the world today. He also emphasized readiness in self-giving without counting the cost or looking at life status but trusting in God’s Providence every day. 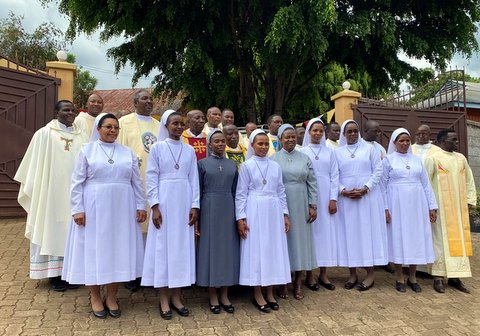 After Holy Communion, Sr. Liberata Niyongira read out the message of Congratulations from the General Superior, Sr. Izabela Świerad. Fr. Francis Mumburi, the Parish priest, translated it into Kiswahili. 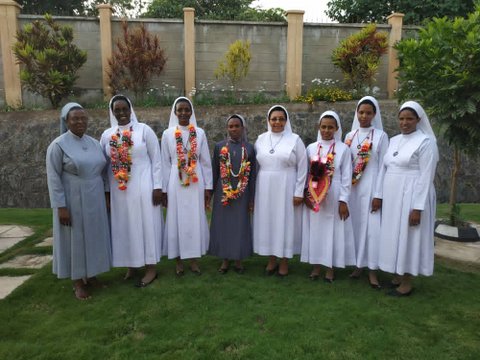 After Holy Mass, the second part of the celebration began. The Priests and the newly professed Sisters had their photos taken, and all the guests were invited into the backyard of the Sisters’ Convent where tents were set up. A variety of delicious food was served, and following true African custom, there was dancing, singing and speeches. It was a joyful celebration! 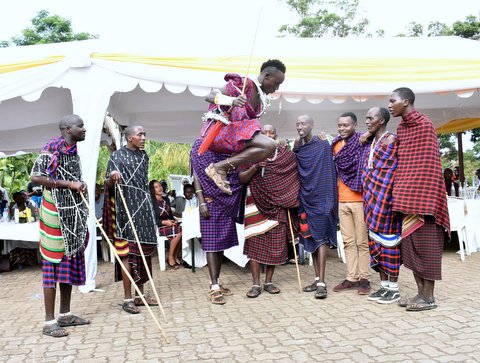 We thank God for all His blessings, and especially for the increase of vocations in our Congregation.